At the age of 15, Adam Lyons was voted least likely to ever get a girlfriend by his high school classmates. For more that 11 years after,  Adam was largely unsucsessful with women, it seemed as though his classmates we’re right, they were... partly. Somehow during this time Adam managed to fall into a couple of relationships, but they didn’t last long, and he spent most of his time truly perplexed by the opposite sex, he had no idea why some guys found it so easy and some, like himself... so difficult. 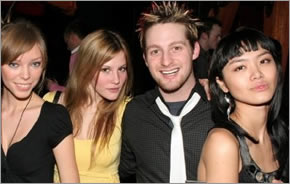 In the summer of 2006, one of Adams best friends handed him a copy of the book, "The Game" by Neil Strauss, with the words: "Read this book, it’ll change your life forever". After reading the book, Adam was determined to get this part of his life handled. He set out with a clear goal to improve his love life and master the art of seduction. He quickly realised that seduction was a learnable skill and that anyone, with enough practice and dedication could possess.

Since then Adam has transformed his life, he no longer worries about his love life. He is the north American CEO of the world renowned PUAtraining.com and has been voted the second greatest PUA in the world.  He has been featured in numerous online and offline publications and was particularly prominent in the Ch4 documentary 'First Cut: The Rules of Seduction'.

Adam advocates a natural form of seduction and is responsible for some of the most successful pickup methods and theology in the community. Some of his core theories and articles that he has become well known for include:

Myframe: a core understanding of what attracts us to other people, and what causes them to be attracted to us in return. From this core knowledge and understanding you can use any method from any Pick Up Company, dating coach or even just invent your own, and still meet and attract the person of your dreams.

Metagame: the idea that meeting someone isn't just about the way you speak to them in the interaction but rather an understanding of the events and situations in the immediate vicinity to that interaction and potentially preceding it. Understanding and affecting these can be a core principle in attracting your ideal partner.
(See entourage game and pre-selection)

Entourage game: also known as extreme pre-selection, this concept involves building a life where you have a great deal of beautiful women around you at all times, so that you are perceived as being attractive and are therefore able to meet and attract others.

Adam is currently running boot camps across the United States, you can find out more about Adam Lyons here: http://www.puatraining.com/trainers/adam-lyons.html and at www.attractionexplained.com
Adams Profile